He is a maneater.  He stalks silently.  He watches the most intimate moments.  He’s had practice.  He has done this before.  He is a familiar face behind bars.  He knows how to work the system but the system believes it has worked him.  How do you rehabilitate a man who feeds on human flesh?

The monster is now an expert.  He now knows how not to get caught.  He’s perfected his skill.  He gets rid of the evidence.  Remains are never found.

He secretly stalks man, woman, child.  It really makes no difference.  Though, he could do without the man, sometimes he is part of the “package.”  What he wants is female flesh.  After he finishes “playing” with his prey, he indulges himself with the tenderloin of the does’.

According to him, it is really very simple.

You can use your imagination to figure out the rest of the story.  It is much too gruesome to write out.  The point of this article is to express anger knowing he has been incarcerated, not once, but numerous times for similar crimes.  How can one release him on society?   Someone this heinous cannot be rehabilitated, can he?  Call it a sickness, a mental illness-my personal thinking is he is out of his mind to commit such acts of violence.  I would rather keep him locked up then to risk unleashing  a wild animal on society.
We seem to be harder on pot smokers and town drunks then we are on real monsters.  The maneaters of society.

I find myself "Dancing With Cancer", problem is...I can't dance. I stumble, bumble, and get pulled along. To keep my sanity, (humor me), I write short stories, a journal, musings and poetry....just about anything goes.

My Hero, My Dad

Granny Has A Whisker

Colorblind Angels,Vol 3- The Color of The Wind Series

My Books of Shelfari

< Previous Next >
+ Add your own event Eventbrite

The Big Black Trunk by Mary Rice Somerville
My rating: 5 of 5 stars

Eleanor L Niedeck The Big Black Trunk. What would you do if the Lord was coming? What would you do if forced to become one nation under one government? What if money was worthless and a computer chip had to inserted in the hand or head of every man, woman and child or starve without it?
What horrifying events to suddenly find yourself faced with all at once. This story follows one family faced with the end times and the decisions they chose. The times of tribulation are endless. Will Christ come? Or is this family just another set of kooks who will be proven wrong when nothing happens?
This book is very well written and once started, difficult to put down. The author tells it in such an insightful and humbling way it gives the reader pause to truly stop and think about what you would do if it were not only you, but your children as well. Would your faith be strong or falter? I recommend this for every Christian and every apolitical reader in general. It raises serious question and food for thought.Renee Robinson [[ASIN:1492844470 Misty Serenade: Wings (The Rise of Dragon Rose) (Volume 1)]] Series 1

When Mountains Move by Julie Cantrell
My rating: 5 of 5 stars

Julie Cantrell, When Mountains Move. A beautiful story with the right touch of romance, mystery and drama. Millie is a lovely character which at first glance, appears to be meek and gentle. Upon further reading, it becomes clear there is much more substance to her. Though she lacks confidence in herself, she is incredibly strong. She has lived through difficult times. Where most would follow down the path they've always known, Millie manages to overcome, seek and find a better life. Something she knew existed, but never had.With time and experience, like a fine wine, an author continues to improve. I will be happy to watch this author as I know it is difficult to improve perfection.
Renee Robinson [[ASIN:1492844470 Misty Serenade: Wings (The Rise of Dragon Rose) (Volume 1)]]

Cries In The Night 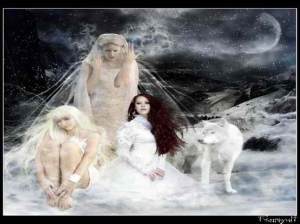 Attention All Authors: I would like to invite you to post your book,sales, bio info & links on my Author page, Shadows & Flames: http://www.facebook.com/zonaflames There will be no charge. As a new Author, I know how difficult it is to get your name out. I thought if one author page contained several authors, instead of 1-more viewers will read. You may post your own info or email to me. TY xxo

Origins of My First Novel

The Guardians by T.M. Franklin
My rating: 5 of 5 stars

BOOK REVIEW BY RENEE ROBINSON
ISBN: 9781612131719 , The Guardians, by T.M. Franklin's – Part 2 of a trilogy. Tells of college student, Ava Michaels. She is intelligent, funny, and “the girl nextdoor” type. She is in love with Caleb Foster who comes up missing. Throughout Ava's efforts to find Caleb, her life and others are at risk as The Rogues, a rebellious group of the race, follow plans of of their own which take everyone by surprise. I can't wait to read the final book. This story is creative, riveting and original. It is a must of the shelf of all sci-fi, fantasy and even paranormal buffs.

Good Morning Heartache by Audrey Dacey
My rating: 4 of 5 stars

Audrey Dacey, Good Morning Heartache 978-0615717302 Alexis is the character you love to hate. She is the definition of “Rich Bitch” and heavy on the B-i-t-c-h. She is sexy and confident yet immature and full of quirks. The storyline pulls you in as you watch this her transform throughout the story. [[ASIN:1490928898 Raining Angels]]

Whom the Gods Destroy by BWM Books . $7.00 from Smashwords.com
When Alma Gane moves in with her daughter Edna, son-in-law Jack and grand-daughter Betty, Edna realises it is more than just space her mother has taken from their home. Shifting from the past to the present, the filial thread interweaves the events of this multigenerational family into a menacing pattern of unease.

Nae's Nest and its contents are © Renee Robinson, all rights reserved

This work is licensed under a Creative Commons Attribution-NoDerivs 3.0 Unported License.

Regarding poetry and short stories.

All characters appearing in my poetry or short stories, excluding my journal, are purely fictitious. Any resemblance to real persons, living or dead, is purely coincidental. "My Journey With Cancer", is a true ongoing story about myself. Any stories about my childhood or family, though embellished, are based on true stories.